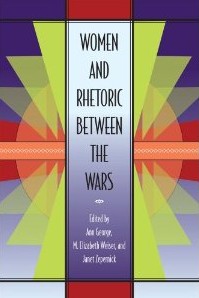 This collection opens up a new subfield in women’s rhetoric by featuring the underexplored period between the world wars—a period in which, contrary to popular and academic history, women were actively involved in public life and wielded enormous rhetorical power. It features women whose practices and theories helped shape the field of modern rhetoric, including familiar figures such as Jane Addams, Amelia Earhart, Helen Keller, and Bessie Smith, as well as less well known, yet nevertheless influential, women such as Zitkala-Ša, Jovita González, and Florence Sabin. Each essay presents examples of women’s rhetoric that move us away from the “waves” model toward a more accurate understanding of women’s multiple, diverse rhetorical interventions in public discourse. The collection thus creates a new understanding of historiography, the rise of modern rhetorical theory, and the role of women professionals after suffrage. From celebrities to scientists, suffragettes to academics, the dynamic women of this volume speak eloquently to the field of rhetoric studies today. The successes and accomplishments of women who united rhetoric with their professional development in the interwar era are indeed stunning. But their erasure from both memory and the rhetorical canon should give us pause as we look with clearer eyes at our own new successes and accomplishments in the opening of this century, which so eerily echoes their own.